THE VAMPIRE VERSES: BLOOD RITES SKETCHBOOK/ART BOOK is a 32 page saddle stitched comic that includes art and sketches from The Vampire Verses series by Frank Forte. The art ranges from 1995 to present day with character studies, cover studies, renders, creature design, environment design, pin-ups and more. The book hopes to reintroduce fans to the series and be a prelude to the continuation of The Vampire Verses #5-#12.

The Vampire Verses is a vampire/horror comic that Frank Forte created in 1994 and was published in 1995 by CFD productions (Formerly Cry For Dawn) and then Asylum Press in 1999 and beyond. The series was inspired by many anime series at the time including Wicked City, Demon City Shinjuku and Urotsukidōji: Legend of the Overfiend. Frank was also inspired by comic creators Berni Wrightson, Tim Vigil, Kelley Jones, Mike Mignola and others. Frank attempted to use all of these influences and create something of my own. What erupted from his hand and mind was The Vampire Verses.

The debut issue introduces Angelika, an exotic dancer in the NYC club scene who is unwittingly turned into a creature of the night. As she tries to make sense of what she has become she learns of a bloody Vampire War that is being fought in the streets and subway tunnels of New York City. Slowly the truth unfolds as Angelika begins to realize she is a key part of an ancient scrolled prophecy known as The Vampire Verses.

Some random paintings from Swiss Surrealist H.R. Giger. Hans Ruedi Giger (/ˈɡiːɡər/GHEE-gər; German: [ˈɡiːɡər]; 5 February 1940 – 12 May 2014) was a Swiss artist best known for his airbrush images of humans and machines connected in cold […]

At the age of 18 Columbia was hired to assist Bill Sienkiewicz in illustrating Alan Moore‘s ambitious Big Numbers series. When Sienkiewicz withdrew from the series in 1990 after the release of the first two issues, Moore and his backers […] 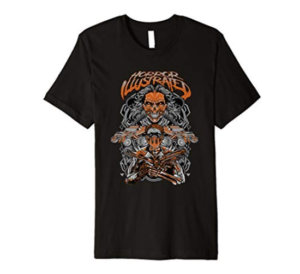